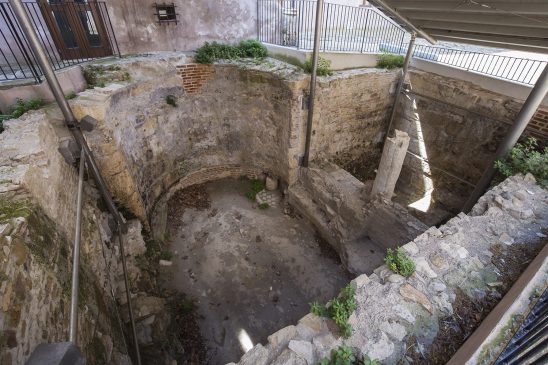 Near Piazza della Rocca you can admire the oldest Early Christian Church of the castle (mid-fifth century). Probably it is dedicated to the martyr Severa who, according to sources, was built near the sea (iuxta mare), near the castle fortress, exactly in the place where – according to tradition – the martyrdom of the Saint and her brothers (Calendino and Marco) occurred during Emperor Diocletian era, June 5th 298 A.D.

Thanks to the stratigraphic excavation works, conducted in close collaboration between Rita Cosentino (Archaeological Superintendence for Southern Etruria) and Favio Enei (Archaeologist and Director of MED), and the work of the volunteers of the Gruppo Archeologico del Territorio Cerite (a non-profit association), the church was brought to light in 2007, after extensive research.

The top of the walls of the church’s apse emerged no more than ten centimetres from the ground of the castle modern paving. The subsequent investigations have brought to light the rest of the building at least 11 meters wide, divided into three naves divided by masonry columns. It has a 3.5-metre wide central apse, with traces of frescoes, preserved for more than three meters high; it was built on a villa from the Roman era, as evidenced by an original section of the floor.

The discovery of a tub-baptistery in the right aisle, created inside a villa’s thermal structure, also testifies it. The Church was abandoned and partly demolished in the second half of the XIV century, perhaps following a fire. Presumably, both the apse and the central nave were entirely frescoed but the filling debris thrown in the medieval period have erased the traces.

The stratigraphic excavation of the interior has returned numerous materials related to the daily life of the castle between the XIII and XIV centuries. Ceramics, glass, metals and above all meal and cooking leftovers tell the life of the fortress and its village. The cult of Santa Severa, which existed at least since the IX century, continued without interruption until the 70s when the devotional statue was still carried in procession.

The feast of Santa Severa, originally scheduled for June 5th, was later moved to January 29th.. Only in our own time, in recent decades, the cult has been almost completely forgotten.