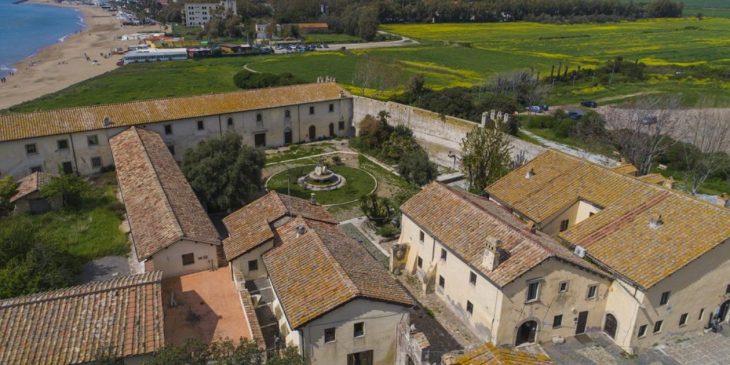 The medieval village, with its stone streets and flying arches, was gradually formed with several phases of construction during the XV – XVI century. The large area consists of several buildings and squares where you can admire the life in the Castle. For example, you can find evidence of one of the peculiar activities: agriculture, with exhibits of vehicles and tools used in the past for the cultivation of the fields.

At Piazzale delle Barrozze, in the centre of the buildings, you can admire a two floor circular fountain, surmounted by three large millstones of oil mill. Starting from 1482, that is the year in which Pope Sixtus IV donated it, and until 1980, the entire structure was property of the Pio Hospital Institute of Santo Spirito, whose distinctive crest with the typical double cross is omnipresent in the village.

Thanks to the Order, we can admire many of the works in the village, such as the splendid churches in Piazza delle Due Chiese, the one dedicated to Santa Maria Assunta and Santa Severa and the other one dedicated to Santa Severa and Santa Lucia (aka the Baptistery). In the latter, among the remarkable frescoes dating back to the end of the XV century, votive graffiti can be seen, depicting ships from the XV and XVI centuries, that are works of the sailors who transited in different eras for the port of Santa Severa, evidence of the role of the town as an important maritime port.

A village that preserves the charm of a place suspended in time.