Home > The Museum of Sea and Ancient Navigation

The Museum of Sea and Ancient Navigation 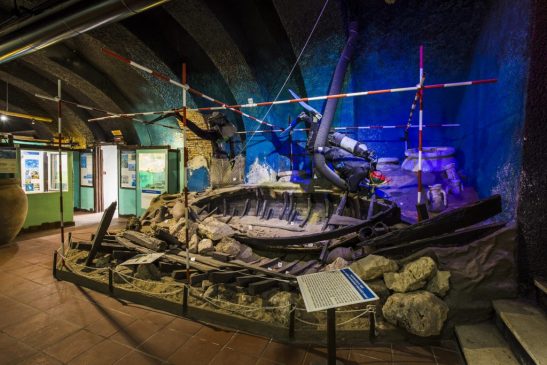 The Civic Museum of Sea and Ancient Navigation is part of the extraordinary archaeological and monumental area of Pyrgi and of the Castle of Santa Severa. A place of great historical importance for the north coast of Rome, frequented from prehistory to nowadays in an uninterrupted manner.

In 2016, twenty-three years after its first institution as a Naval Antiquarium, the Museum presented itself to the public in a completely new and enriched manner as concerns exhibition spaces, layout and contents. Seven rooms host over a hundred finds distributed along an exhibition and educational itinerary that introduces visitors to the theme of underwater archaeology and ancient navigation by illustrating various interesting aspects of “life on the sea and for the sea”.

The Museum aims at preserving and enhancing the archaeological evidence from the seabed of the “cerite” coast between Alsium and Centumcellae, with particular reference to the port of Pyrgi. The museum structure was built in collaboration with Soprintendenza Archeologica per l’Etruria Meridionale, Regione Lazio and Provincia di Roma.

It allows approaching with simplicity the world of the ancient sailors through evocative reconstructions of environments and instrumentations, fruit of the patient work of research of the Maritime Studies Center of the Museum, in collaboration with specialists from various Italian universities and other European countries. The work led to the creation of a very special Civic Museum of the Sea and Ancient Navigation, capable of stimulating interest and curiosity towards the nautical world of the ancient Mediterranean.

Honoured for the regional quality label since 2005, illustrated several times by the Italian public on well-known television programs such as Linea Blu, Geo & Geo and Superquark by Piero and Alberto Angela, this dynamic museum is a new scientific reference point in the north coast of Rome.

Manage Cookie Consent
To provide the best experiences, we use technologies like cookies to store and/or access device information. Consenting to these technologies will allow us to process data such as browsing behavior or unique IDs on this site. Not consenting or withdrawing consent, may adversely affect certain features and functions.
Manage options Manage services Manage vendors Read more about these purposes
View preferences
{title} {title} {title}