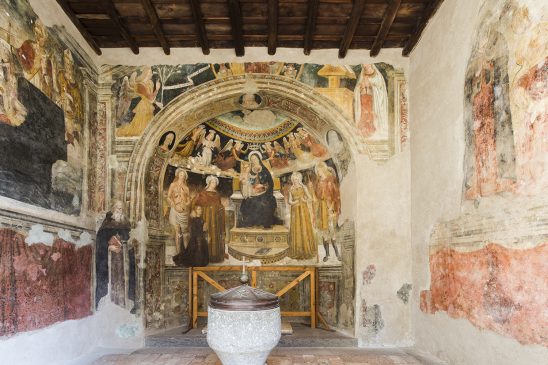 The Hospitaller Order of Santo Spirito, which took possession of the building in 1482, performed various renovations and edifications and, at the beginning of the 1500s, built a small church dedicated to Santa Severa and Santa Lucia – known as the present baptistery.

The small chapel presumably dates from the XIV century. Characterized by the presence of a baptismal font made with a part of millstone from the Roman era, it preserves inside the frescoes of the second half of the XV century, attributable to the school of the painter Antoniazzo Romano.

In the central apse, we can see a splendid fresco that portrays the Madonna enthroned with the Child. On its sides we can see, on the left, San Sebastiano, pierced by darts, and Santa Severa, in the act of introducing to the Virgin the preceptor of the Holy Spirit Gabriele De’ Salis, recognizable by the double cross on the garment, and possible patron of the frescoes.

On the right, we find Santa Lucia and San Rocco. In the intrados, three medallions represent the heads of Abraham, David and Daniel. On the back wall, above the apse, there is a scene depicting the Annunciation. The central oval with the depicted image of Christ is partially visible due to the overlapping of the modern ceiling. At the bottom on the left, there is a standing Sant’Antonio Abate, while the lower right section of the pictorial surface has disappeared.

On the left wall, there is a scene representing a miraculous fishing, with the appearance of two Holy Bishops to the crewmembers of a ship. The boat carries the emblem of the Confraternity of the Holy Spirit on the white banner fixed on the tree master. Here you can see a sailor climbing the tree, under the crow’s nest. Under the stern of the ship, there is a small boat that houses two men, one of which holds the rope from the ship.

In front of the bow, there is a painted San Lorenzo, with the classic grid in the left hand and the regula in the right one. The wall on the right is the most degraded of the small building and it is hardly visible part of a Crucifixion with the kneeling Magdalene and the Virgin Mary standing with clasped hands; note the lines of preparation of the design, engraved on the underlying plaster.

On the plinth decorated with drapery there are interesting votive graffiti depicting ships of the XV and XVI centuries, probably the work of sailors who transited in different eras for the port of Santa Severa; these graffiti constitute a small archive of naval iconography, relating to the period mentioned above.